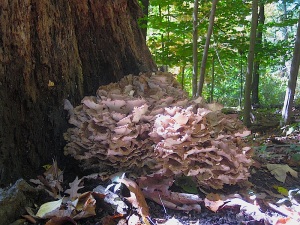 Instead of going to the pharmacy for your medicine, venture into the woods behind the building and harvest the real healing wonders of this planet (Maitake, Grifola frondosa, found near Pittsburgh, PA)

Less often do we hear the phrase, “Eat more mushrooms for good health,” and if we look at the research, one may wonder why we neglect to include our fungal friends in the dietary limelight.  Perhaps we tend to lump them into the category of vegetables (this is what I was taught to do in my nutrition classes, for example, when creating meal plans), though if we study the biology of mushrooms, they more closely resemble fruits in their reproductive roles.  Or perhaps here in the United States, mushrooms just haven’t found their way into our national cuisine (though edible fungi have been on this continent far longer than bread and boxed cereal).

Whatever the reason, it’s all a bit unfortunate.  Many mushrooms are quite nutritious, and many are medicinal.  I’ve previously written about the nutritional benefits of morel mushrooms, and would now like to explore the world of yet another equally impressive fungal ally.

The maitake mushroom (Grifola frondosa), also known as “sheep’s head” or “hen of the woods,” is a polypore that grows at the bases of oak trees.  In addition to its culinary versatility (one of my favorite choice edibles from the fungal kingdom), the maitake mushroom has been researched extensively for its nutritional and medicinal effects.  Let’s take a look at the research:

All mushrooms contain a fungal cell membrane molecule known as ergosterol.  Upon UV exposure, this compound is converted into ergocalciferol, or vitamin D2.  Some mushrooms contain more vitamin D2 than others depending on the species, environmental conditions, and post-harvest treatment.  Maitake mushrooms, at 100 grams of fresh material, have been shown to contain more than 2,000 IU of vitamin D2 when exposed to supplementary UV treatment (1).

To increase the vitamin D2 content of your mushrooms, place them gills-side-up under direct sunlight.  Sliced mushrooms will yield even more vitamin D2, as this method increases surface area and allows more ergosterol to be exposed to sunlight (2).

There is ample research suggesting that maitake mushrooms may play a role in the protection against various cancers, with one key compound gaining most of the attention.  Known as D-Fraction, this polysaccharide has the ability to enhance certain immune system cells, such as macrophages, helper T cells, and cytotoxic T cells, which all work together to attack tumor cells.

In one clinical trial, D-Fraction was administered to cancer patients without the combined use of conventional therapies.  As a result, metastatic tumor growth slowed down, tumor lab markers decreased, and natural killer cell activity increased (natural killer cells are immune system cells that play a role in inducing tumor cell death).  These results were witnessed in all patients (3).

Other studies have shown that D-Fraction can induce cellular death (a process known as apoptosis) in human breast cancer cells and advanced renal-cell carcinoma cells (4, 5, 6).  Additionally, D-Fraction has been shown to reduce bladder cancer cell growth and has been linked to bladder cancer disease remission (7, 8).

For many of the same reasons that maitake may help protect against cancer, it also plays a critical role in supporting immune system health.  Maitake contains important polysaccharides which, as mentioned previously, help to enhance the activity of certain immune system cells, such as T cells, B cells, macrophages, and natural killer cells.  Ultimately, polysaccharides from the maitake mushroom act as immune system regulators (9).

Oxidation is a natural process in the human body that, if left unchecked, can result in conditions such as atherosclerosis, diabetes, and Alzheimer’s disease (just to name a few).  Antioxidants combat the process of oxidation, and can be produced internally as well as provided externally through the consumption of antioxidant-rich foods.

A hot-water extraction of maitake mushroom has been shown to exhibit anti-angiogenic activity  through its antioxidant actions against free radicals (molecules that can lead to the oxidation cascade).  Angiogenesis is the process whereby new blood vessels are formed from the preexisting vascular system.  While this is a normal part of the wound healing process, angiogenesis is also involved in tumor progression from the benign to malignant state.  Administration of maitake mushroom, therefore, may be a unique approach to combating angiogenesis (12).

Antioxidants isolated from maitake mushroom have been shown to be effective against other reactive molecules found in our bodies, including the hydroxyl radical and the superoxide radical (13).  These molecules may play a critical role in several diseases, such as hypertension, cardiovascular disease, and myocardial infarction.  Consumption of maitake mushroom with its naturally occurring antioxidants, including its phenols, flavonoids, ascorbic acid, and α-tocopherol may be a wise strategy in protecting the body against diseases associated with oxidation (14).

Maitake mushroom extracts have been shown to demonstrate protection against diabetes in several studies.  For example, research has looked at the ability of maitake mushroom extracts to inhibit alpha-glucosidase, an enzyme that breaks down starch and simple sugars to glucose (15).  By inhibiting this enzyme, glucose absorption slows down in the body.  Not surprisingly, many oral anti-diabetic drugs are alpha-glucosidase inhibitors.  Because maitake mushroom naturally contains alpha-glucosidase inhibitors (how many times must I type alpha-glucosidase?), this information may be of importance for individuals seeking to bypass conventional diabetic medications, which usually present a host of unwanted side effects like severe stomach pain, constipation, diarrhea, and jaundice (plus, hunting for wild maitake in nature is a lot more exciting than spending time under fluorescent lights at the local pharmacy … just my opinion).

Maitake (or sheep’s head, or hen of the woods … whichever you prefer!) is a true superfood, not only for its edible value, but additionally for its powerful medicinal properties.  If you have access to fresh maitake mushrooms, I encourage you to harvest and use them in a variety of ways (cooked in butter, decocted in hot water, tinctured in alcohol).  For individuals who cannot find them in the wild or in the supermarket, dried mushrooms can be purchased online.  Additionally, many supplement companies sell mushroom extracts.

As I have written previously, the phrase “Let food be thy medicine, and medicine thy food,” may be difficult to implement using today’s medicine-deficient, hyper-domesticated food supply.  The wild maitake mushroom, however, solves this dilemma, making it just a bit easier for Homo sapiens to acquire all that this species was designed to receive.

If you’re interested in learning how to properly identify the maitake mushroom, check out the video!

Thanks for reading and watching, and as always… happy foraging!

Let’s stay in touch!  To receive information from Adam Haritan on wild plant and mushroom identification, please enter your name and email address below.  Thank you!

Additionally, don’t forget to check out the Facebook and Instagram pages to learn more about wild food nutrition and identification!