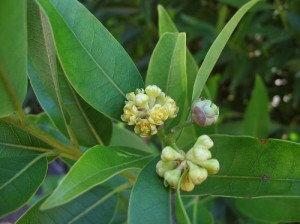 Holiday dietary advice usually focuses on the amount of food eaten, and the guidance almost always pertains to the idea of “food as calories.”  I’ve never been told to watch my intake of plants, nor to be cautious of all the natural medicine I may be receiving, because let’s face it:  we tend to view food as a source of macronutrients only (carbs, fats, proteins).

It’s easy to overlook the herbs, spices, and seasonings used in holiday dishes.  Without them, however, no meal would seem complete.  I’d like to showcase some of the plants that play a starring role in the modern American Thanksgiving menu, and briefly summarize their traditional usage in North America*.

Now, I understand that the real story of Thanksgiving is a bit murky, and may be perceived differently depending on cultural beliefs.  It is not my intention to discuss this particular issue.  Rather, I am simply presenting 4 herbs that are used today in Thanksgiving meals, and linking them back to their utilization centuries ago.  The first two plants are native to North America, while the remaining species were introduced from different continents.

Salvia is the largest genus in the mint family, and many of its species have been used by the indigenous peoples of North America (thistle sage, gray ball sage, purple sage, lyreleaf sage, black sage, etc.).  I will be focusing solely on one particular species: Salvia apiana, or white sage.

The Cahuilla, Native Americans who primarily inhabit southern California, used white sage as a cold remedy and dermatological aid, and also seasoned their food with the aromatic leaves.  Like the Cahuilla, other southwestern groups, such as the Kumeyaay and Luiseño, ate the seeds dry or as a porridge, known as pinole.

Today, we can receive the non-conventional benefits of white sage quite simply.  For example, herbal decoctions can be brewed, and smudge sticks can be created using the plant.  Its distribution is limited to the Pacific Southwest, but the conveniences of modern living have allowed cultivated sage to be readily available in supermarkets across the globe.

Leaves from several different species refer to the bay leaves used in cooking, and are found growing in several continents. The species native to North America is referred to as the California bay laurel, a perennial evergreen tree found in California and southern Oregon.

Several parts of the plant were used by Natives of the Pacific coast, including the Cahuilla, Karuk, Pomo, and Yuki peoples.  Leaves were steeped as an infusion for stomachaches, the flesh and inner-kernel of the fruit were used as food, and branches were placed around households to repel insects.

The California bay laurel contains aromatic camphor-like volatile oils, and is more potent than the commercially available European bay leaf (Laurus nobilis).  If used in cooking, a smaller amount is needed to achieve the desired effect.

Creeping thyme is another plant in the mint family.  Unlike white sage and the California bay laurel, creeping thyme is native to Europe, and only became widespread in North America upon introduction.  Still, the Delaware Natives utilized creeping thyme as a febrifuge, and would administer the plant for individuals experiencing fever or chills.

What was once a cultivated ornamental has escaped to become a somewhat invasive species here in the United States.  Various states and provinces throughout North America host wild thyme, as do several countries throughout the world.  As many are aware, thyme makes an excellent addition to Thanksgiving fare, contributing not only flavor, but medicine as well.

Parsley is another plant native to Europe that, when introduced to North America, became utilized by various groups for specific conditions.  For example, the aerial and root components were used by the Cherokee as abortifacients and gynecological, kidney, and urinary aids.  The Mi’kmaq, who are indigenous to Canada’s Maritime Provinces, used the herb as a urinary aid, specifically for the condition of “cold in the bladder.”

Wild parsley can be found scattered throughout the United States and Canada, among other areas of the world.  A word of caution for foragers: poison hemlock (Conium maculatum), also in the carrot family, resembles parsley yet is highly toxic to animals and humans.  That said, there are noticeable differences between the two species, and it is best to familiarize oneself with both organisms before harvesting.

Of course, substituting wild herbs for the store-bought, cultivated varieties isn’t the only way to enhance the experience of Thanksgiving.  One could also harvest wild turkey (Meleagris gallopavo), collect bog cranberries (Vaccinium oxycoccos), and process acorns (Quercus) into stuffing, transforming the traditional Thanksgiving celebration into the wildest holiday imagined.

But don’t worry if you’re not there yet.  I’m certainly not, but strive each day to reach that place.

And what greater way to say “thank you” than sharing the incredible resources, given freely to us by nature, with friends and family?